I first became interested in these unique memorials when I found the indent of one in a ledgerstone at Oulton. An indent is where the brass has gone but the shape remains. I have now recorded over 20 of these memorials in Norfolk, and realise they cover just a 30 year period.  The image above is of one in St Giles Church, Norwich which is the oldest I`ve yet discovered, 1499.

Each one is to a priest, and usually their names are quite readable. Even when the brass has disappeared the shape gives it away. They must have been made by one workshop - presumably in Norwich - and they are distributed across the eastern half of the county. They are all very similar, with minor variations of the style of chalice.

This 3-night course is based at Denman College near Abingdon. Transport is included for two full day outings and selected trains are met at Didcot or Oxford stations for those coming without their own transport.

Discover a new selection of churches in the wonderful Kennet and Lambourn Valleys. We will learn about the architecture of the churches, their building materials, furnishings, memorials and stained glass. There will be two full day outings to enable hands-on exploration so a degree of walking will be involved.

LEDGERSTONES are a familiar sight in our churches but are frequently dismissed as boring or less important than other features. However I want to tell you why I feel they are so exciting and what clues they give us.

In these days of church reordering ledgerstones are frequently lost under carpet or find themselves inside toilets and kitchens and it is important that we should record them before they are lost forever.

For several years I was Secretary of the LSEW and we estimated that there are 250,00 surviving examples.
Whilst there are engraved grave markers going back to about 1200, ledgerstones as we recognise them today really start appearing in the early 17th century, when black Marble started to be imported from the continent.

They each cover an individual burial vault and may be likened to the lid of a rectangular biscuit tin.
The vault itself may be up to 12 feet deep, enough for 6 coffins, and brick lined. The ledgerstone sits on top of the brick walls and lies flush with the church floor. More often that not the slab is then engraved with an inscription to the deceased. At a later date if more family burials are to be made into the vault the lid is prised open and relaid, often with a further inscription added on the slab.

What was an Easter Sepulchre? It was the tomb of an individual erected on the north side of the chancel which over each Easter weekend would be used as a focus for devotion, representing the entombment and resurrection of Christ. It always had a flat surface on which the sepulchre itself would be placed.

In fact, we have erroneously been using the name Easter Sepulchre for many years. What we see today is the stone structure onto which the Sepulchre, a temporary structure, was placed. Only one medieval Easter Sepulchre survives at Cowthorpe in Yorkshire, but it’s of a different type altogether, not for placing on a tomb. It is now commonly accepted that the sepulchre itself was a wooden chest containing either the cross from the main altar or a Consecrated host. It may have depended on the size of the sepulchre as some are so small as to only be able to house a Host.

These monuments were installed in churches from the 13th century until the Reformation, with a peak of popularity in the 15th century. The ordinary church would only ever have one, so it was the first person to the post as it were. The early ones are rarely inscribed with the name of the donor, the later ones usually known.

Forty years ago, Dr Pamela Sheingorn went through medieval wills to list all those mentioned in England and discovered several hundred. There were undoubtedly more that have gone unrecorded. 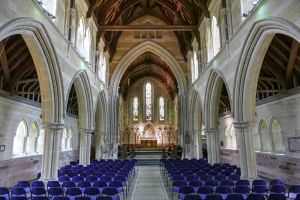 New Zooms for 2022
My Programme of Zoom lectures is now available. As well as some old favourites there are a couple of new titles! Places are limited to just 30 people, so please book early! Bookings close the day before. For Weddings, Baptisms and Funerals, January 1...
Read More 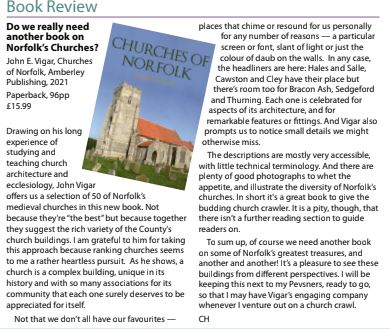 Norfolk Churches Review
If you haven`t yet purchased a copy of my recently published book perhaps this review from the Norfolk and Norwich Archaeological Society will encourage you.   Or this longer review from the East Anglia Daily Press https://www.edp24.co.uk/l...
Read More 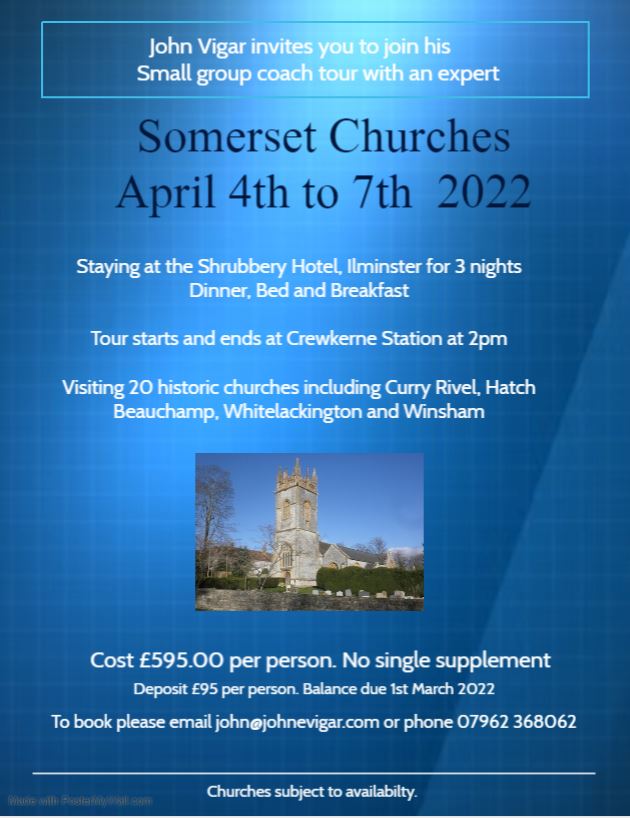 2022 Church Tours
I`m delighted to report that I am now taking bookings for my April 2022 weekend based in Somerset that was originally planned for April 2020. This three night coach tour will be based in Ilminster at a comfortable hotel that we have used before and w...
Read More
August rambles
1. I`ve recently gone on two churchcrawls in East Anglia and I am pleased to say that churches here are opening up again. However I hear from other parts of the country that are still in severe lockdown.  A few weeks ago I was in York and able t...
Read More